ADVOCACY EVENTS THAT MAY BE OF INTEREST TO H.S.A. MEMBERS – FRIDAY OCT. 7 AND SUNDAY OCTOBER 9 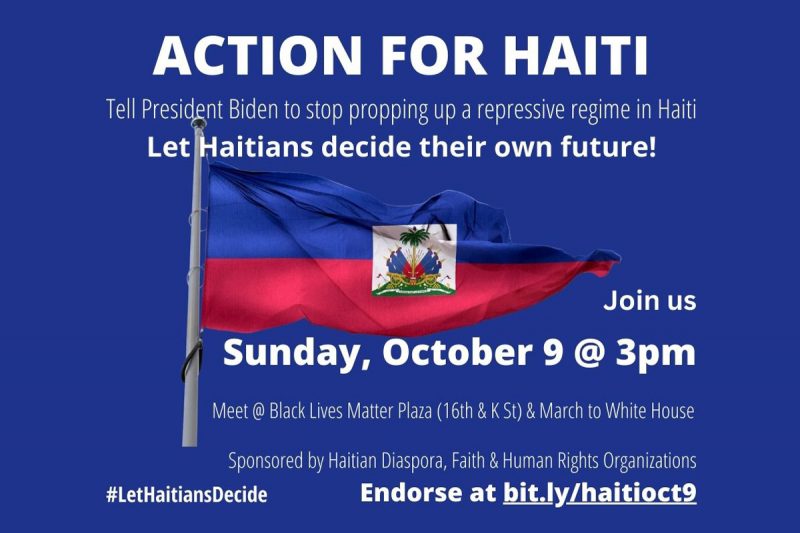 there will be an urgent conversation about what is next for US policy in Haiti, bringing together Haitians coming from Haiti, the Haitian diaspora, and solidarity activists. On Sunday, October 9, at 3 p.m. will be a direct action.

The US policy towards Haiti has remained unchanged over the last year and half, despite the drastically worsening conditions in Haiti. Many of us have taken action and advocated with the Biden Administration, members of Congress, and the State Department, but we have not yet had the impact so desperately needed.

On September 22, a rally and press conference demanding the U.S. end racism in the immigration system, specifically directed at Haitians, launched activities focused on human rights in Haiti. Building on this moment during the first week of October, thousands of people will be in Washington, DC for Haiti-themed events including A Week on Haiti, the Haitian Studies Association Annual Conference, and the Haitian Ladies Network Annual Weekend. This is an extraordinary opportunity to bring together three key groups – Haitians coming from Haiti, the Haitian American diaspora, and solidarity activists – to build one broad coalition that is too big to be ignored.

Confirmed speakers as of 9.29 include:

Click here to learn more and fill out this short form to RSVP for the event. For more information, please contact Melinda Miles (melinda@haitiresponse.org).

On Sunday, October 9, 3 p.m., there will be a direct action calling for the US government to stop propping up a corrupt, repressive, lawless regime in Haiti.

Participants led by clergy and allies will meet at Black Lives Matter Plaza, 16th street two blocks north of White House, by the Farragut North (Red Line) and Macpherson Square (Blue, Orange, and Silver Lines) and walk to the White House to demand an end to the Biden administration’s support for the repressive regime against which Haiti’s people have been protesting for months.

On October 9, meeting at BLM Plaza (16th & K), a broad coalition led by clergy will stand in solidarity with Haiti’s repressed people in their calls for an end to this regime, which would fall without U.S. support.  Participants will be demanding an end to our years-long anti-democratic policy of hand-picking Haiti’s leaders and propping up repressive regimes in Haiti.

This event is being led by a broad coalition.  Participants and supporters include Faith in Action International, the Family Action Network Movement (FANM), Beyond Borders, Quixote Center, the Institute for Justice & Democracy in Haiti, Haitian Neighborhood Center (Sant La), Pax Christi USA, the Presbyterian Church USA, and many others.