The Energy Potential of Marine Macroalgae in Haiti

Welcome to the HSA Working Group on the Environment's blog series. For information on how to contribute your work, please contact Gary Gervais, ggervais@hushmail.com, or Lois Wilcken, makandal@earthlink.net.

Fig 1: Sargassum invasion on the South coast of Haiti, 2014

Haiti, like most Caribbean countries, faces a growing energy crisis due to the increasing costs of fossil fuels and the lack of indigenous domestic energy supplies. Biofuels are increasingly considered as alternatives to fossil fuels to power modern societies, but they carry their own negative environmental impacts and limitations. In order for biofuels to make a more positive impact on the energy economy of Haiti, three conditions must be met: (i) a new source of millions of tons of sustainably sourced biomass must be discovered with fewer negative environmental impacts than fuel wood; (ii) the biomass must be safely and efficiently transformed into a useful fuel to serve the needs of homes and industries; and (iii) an entire transportation and distribution network has to be created to place this new energy supply in the hands of the end users. Today, we will discuss our research into turning sargassum seaweed into useful biogas energy.

In our laboratory at the University of Puerto Rico (UPR), we have spent a decade exploring the technical and economic viability of using marine macroalgae as a source of biomass to replace part of the fossil fuel demand. Puerto Rico (PR) is even more dependent on imported fossil fuels than Haiti, as 98% of our total energy supplies come from imported oil, gas and coal. Just for comparison, PR imports more than 35 million barrels of oil equivalents per year, while Haiti imports about 7.7 million. The total cost of these imports represents $855 per capita in PR and $47 per capita in Haiti (CIA 2020). In addition to the great environmental costs that these fossil fuels impose on our countries, these imports represent a huge tax on local economies, so that any substitution of imports with domestic energy supplies would represent a positive contribution to economic development in both jurisdictions.

Our research has shown that sargassum can be converted into biogas even in full-strength seawater – that is seawater which is at least 3.2% sea salts. Our research, originally funded by the US Department of Defense from 2012-2015 ( Grant # W911NF-11-1-0218), was designed to demonstrate whether an anaerobic digester could operate in seawater to convert marine biomass into biogas. Biogas is produced by microbial processes which must be carried out in the total absence of oxygen, since it is exceedingly toxic to the microbes which produce methane gas, the key fuel component of biogas. The devices where this process is implemented are called bioreactors, or anaerobic digesters, and are simply large sealed tanks into which one pumps a feed slurry of water and ground up biomass. The slurry passes slowly through the tank as the microbes inside consume the biomass (in our case a sargassum slurry), converting the carbon in the algae into new microbial cells and excreting biogas as a waste product. The same liquid volume that enters the bioreactor every day at the inlet end must be matched to the removal of an equivalent volume of spent effluent at the outlet end, in order to maintain a constant volume of liquid. The spent effluent is still rich in nutrients, dead microbial cells and minerals, and in our original proposal to the DOD we described the possible end applications of this effluent as part of our proposed biogas industry. Our primary interest has been the use of these effluents to promote the creation of a local aquaculture industry to grow high value macroalgae which are commonly used as source of fine chemicals, food, and nutraceuticals. In contrast to Haiti, which has no macroalgae industry, the production and transformation of marine algae is a major industry in Asia, the North Atlantic, and some other Caribbean islands.

Each year, from five to twenty million tons of sargassum drifts across the Caribbean, until it lands on the shores of the islands and the Gulf Coast of Mexico and the United States (US) (Yong, 2019). Haiti, the Dominican Republic (DR), and PR all have to deal with the massive amounts of sargassum which pile up the beaches for a few months every year. In PR and the DR, municipal governments must spend millions of dollars every year to haul tons of sargassum to the sanitary landfills. The marina in Palmas del Mar Puerto Rico alone spends US$175,000 just for sargassum removal from that one small area (Días-Torres, 2021). The excess algae may also destroy coastal fishing in addition to shutting down the tourism industry. Milledge and Harvey reported in 2016%% that Caribbean nations were spending US$120 million per year for sargassum removal, while the island city of Galveston Texas alone was spending US$3.5M per year. As you may already know if you have visited the beaches near Jacmel, this huge mass of algae rots on the beaches, producing toxic hydrogen sulfide gas and driving away tourism.

This biomass could be transformed from an environmental nightmare into a valuable asset if we can demonstrate the technical and economic viability of producing biogas at an industrial scale. Our ten years of work have shown that the technology works at the laboratory scale. What is now required is a pilot facility where we can generate the necessary hard data on feedstock variability, biogas production rates, effluent composition, and effluent applications. With good pilot plant data we could conceivably convince investors (either public or private sector) to invest in the first large scale demonstration plant.

Our group at UPR, in collaboration with researchers from Université Quisqueya in Port-au-Prince, as well as American University of the Caribbean (Les Cayes) have been actively seeking funds from international agencies for the construction and operation of a pilot plant on the south coast of Haiti, which receives the largest deposits of sargassum in the country. Unfortunately, we have yet to receive financing from any of the agencies we have approached. This is only partly due to the current political and social instability in Haiti; other factors impede our fund-raising efforts. These proposals were prepared with a variety of collaborating local and international institutions to build pilot plants in Puerto Rico, the Dominican Republic, and/or Haiti. Biofuels research, like most applied research, is at the mercy of the whims of national and international agencies that are driven by scientific fashion and popularity as much as by scientific need. Unfortunately, marine biofuels research was recently in a trough and none of our proposals were funded. On a more positive note, the scientific gossip has it that algal biofuels may come back into favor, at least during the Biden administration. In any case, we have already achieved what we can hope to accomplish in our small laboratory bioreactors (See Fig 2), and the next stage of our research must be at a much larger scale, hence, the need for a pilot plant. 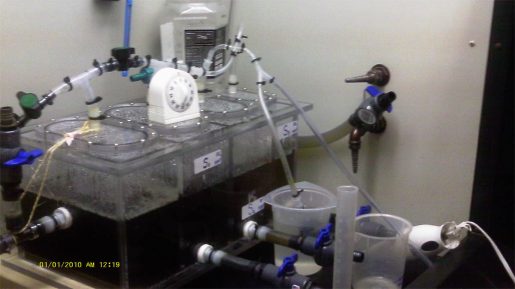 Figure 2. 15L laboratory bioreactor at the University of Puerto Rico.

To better understand the potential, we can project the biogas output for every thousand tons of sargassum slurry we process. We should point out that our own research, as well as research from other labs around the Caribbean over the years, has shown that sargassum is one of the most difficult macroalgae species for anaerobic digestion, as the cell wall material is very resistant to anaerobic degradation. Therefore, if we can make useful amounts of biogas from sargassum (see Fig. 3), then we are convinced that we can do so with any other local algae species. 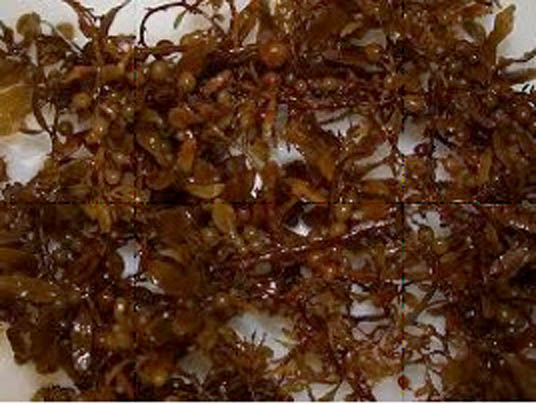 Wet sargassum (just collected from the sea) has about 5 to 7 percent solids content, so 50 to 70 kg of dry algal biomass per metric ton. The fuel value of these organic solids, assuming you just burned them in air, would be about 8 million kilojoules per metric ton. Table 1 offers a rough breakdown of the yields of biogas fuel we can anticipate for every thousand metric tons of fresh sargassum we process, under optimistic and pessimistic assumptions for biogas energy yield. The design basis is a process for converting 1000 metric tons per year of fresh sargassum into biogas and other useful by-products. Since sargassum is only available for three to six months per year (spring through fall), it is more cost-effective to harvest the algae at the peak of its production, convert the raw sargassum into silage for long term storage, and then gassify the silage throughout the entire year in a bioreactor. This permits us to keep the bioreactor in operation year-round, even though the feedstock (sargassum) is available for less than half of the year.

Table 1: Design specifications for a small biogas plant for Haiti

It is clear from these numbers that although sargassum is plentiful in the Caribbean, it could not supply more than a small fraction of the current annual fossil fuel demand of Haiti (7.7M barrels of oil equivalent). Realistically, we could not hope to harvest more than half a million tons of floating sargassum rafts off the Haitian coast (optimistically equivalent to 12,000 BOE of energy). Therefore, although biogas does represent an option for mitigating the serious environmental problems caused by sargassum on the south coast of Haiti, it could only substitute for a small fraction of the total annual fossil fuel energy demand of the country.

However, we have shown that intense cultivation of marine macroalgae off the coasts of PR in aquaculture farms could provide a significant fraction of the total energy demand of PR. Intensive aquaculture of macroalgae has been shown to produce much more biomass per hectare than natural harvests—and there is much data to support this (Roesijadi et al, 2010). Haiti has a great potential for macroalgae aquaculture, given its long coast line and relatively low per capita energy consumption and we would strongly urge Haiti to consider the feasibility of creating a marine aquaculture industry for biomass production for food, fuel, and fine chemicals. Many island jurisdictions have already created vibrant macroalgae industries, and Haiti can do the same.

Building a demonstration plant to convert invasive sargassum into useful biogas could serve as a transition step in the development of a full scale macroalgae biomass industry which would produce not only energy but also food products, fertilizers and other fine chemicals which have a very high market value. Meanwhile, the demonstration plant would allow Haitian scientists and engineers to perfect the technology of biogas production, the safe harvest of sargassum, and later the intensive harvest of commercially grown algal species. The demonstration plant would also serve as a proving ground for the development of the potential high-value by-products which would make the whole operation economically sound, in addition to being enormously beneficial to the coastal environment.

Yong, E. 2019. Why Waves of Seaweed Have Been Smothering Caribbean Beaches

Since 2011, blooms of Sargassum have wreaked havoc on tropical shores. A new study explains why this is likely a new normal. The Atlantic Monthly. July 4, 2019.

gassify: A biological or thermochemical process for converting a solid or liquid into a gas. In our laboratory, sargassum seaweed is converted into biogas using a microbial process.

kilojoules (kJ): A common unit of energy.    A liter of gasoline has a heat of combustion of 34,200 KJ of thermal energy or 8170 kilocalories/

Nutraceuticals: Specialized food products of high nutritional value or with medicinal properties.  Many marine products are now being marketed as nutraceuticals.

Sargassum: A large family of brown macroalgae ( more than 100 described species), more than one meter long, which may be found free-floating as large rafts in open waters of the Atlantic (The Great Sargassum Sea).   Some species attach to the bottom substrate in shallow coastal waters.

silage: Raw plant biomass which is allowed to ferment slightly in to permit long-term storage at room temperature without losing nutritional value.