The Roots Are Many and Deep: Social, Cultural, and Spiritual Dimensions of Haiti’s Ecological Crisis (Oct. 19, 2021) 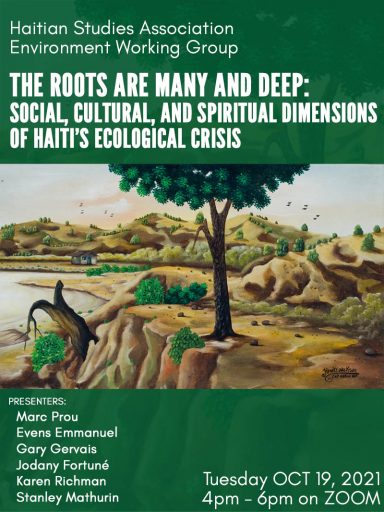 On boarding the ship to his captivity in 1802, Toussaint L’Ouverture delivered a characterization of liberty that would become famous: its roots are many and deep. In the 217 years since Haiti’s independence, the nation’s liberty has been challenged, its roots entangled with invasive species, likewise many and deep. This meeting of HSA’s Working Group on the Environment (Konbit) will present the multidisciplinary perspectives of five scholars and activists. After introductory remarks—presenters’ names and affiliations and discussion ground rules—each of the five presenters will make a statement of no more than five minutes in order to allow maximum time for comments, questions, and discussion with attendees. The meeting will end with an announcement from our blog/vlog team about the progress of that effort, and with suggested ways for all to become involved.