Past Conferences, Past Events

Throughout our conference we will have a series of special events: advocacy panels, keynotes, plenaries, social mixers, and more. You can read details about these events on this page. Click here to see our three pre-conference events. 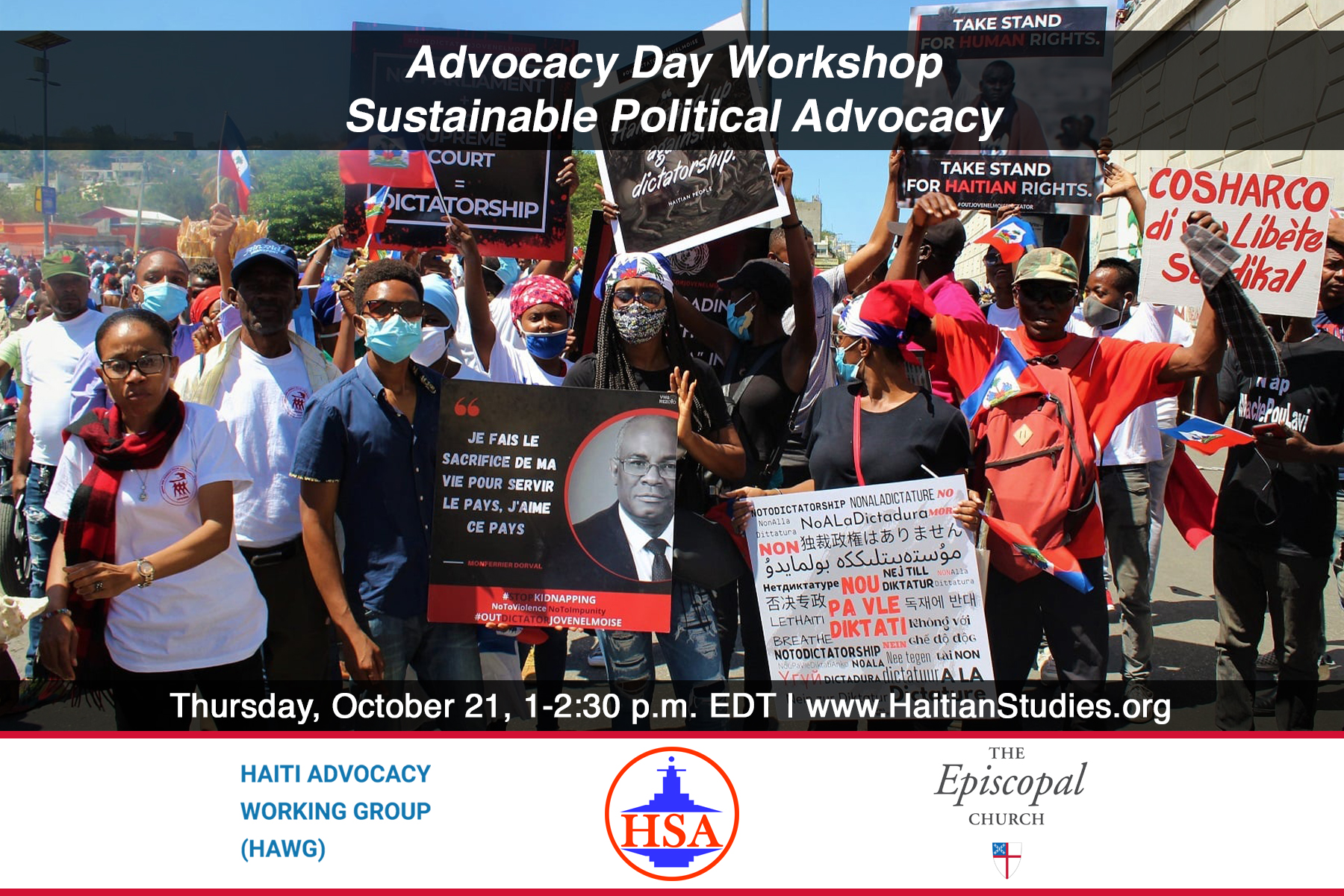 This event is free and open to the public. Click here to read more and view recording of livestream.

For starters—what is policy advocacy and how is it different from, and complementary to, political activism? Moreover, working for justice on any issue, including through policy advocacy, is an exhausting process, especially in complex contexts like Haiti. As so many issues are pressing for our time and attention, we risk burnout and being overworked. Learn how to craft an approach to policy advocacy that also acknowledges the need for self-care and maintaining energy for long-term, effective engagement. Attendees will come away with best practices for advocacy and a deeper understanding of various advocacy tools and how to use them. 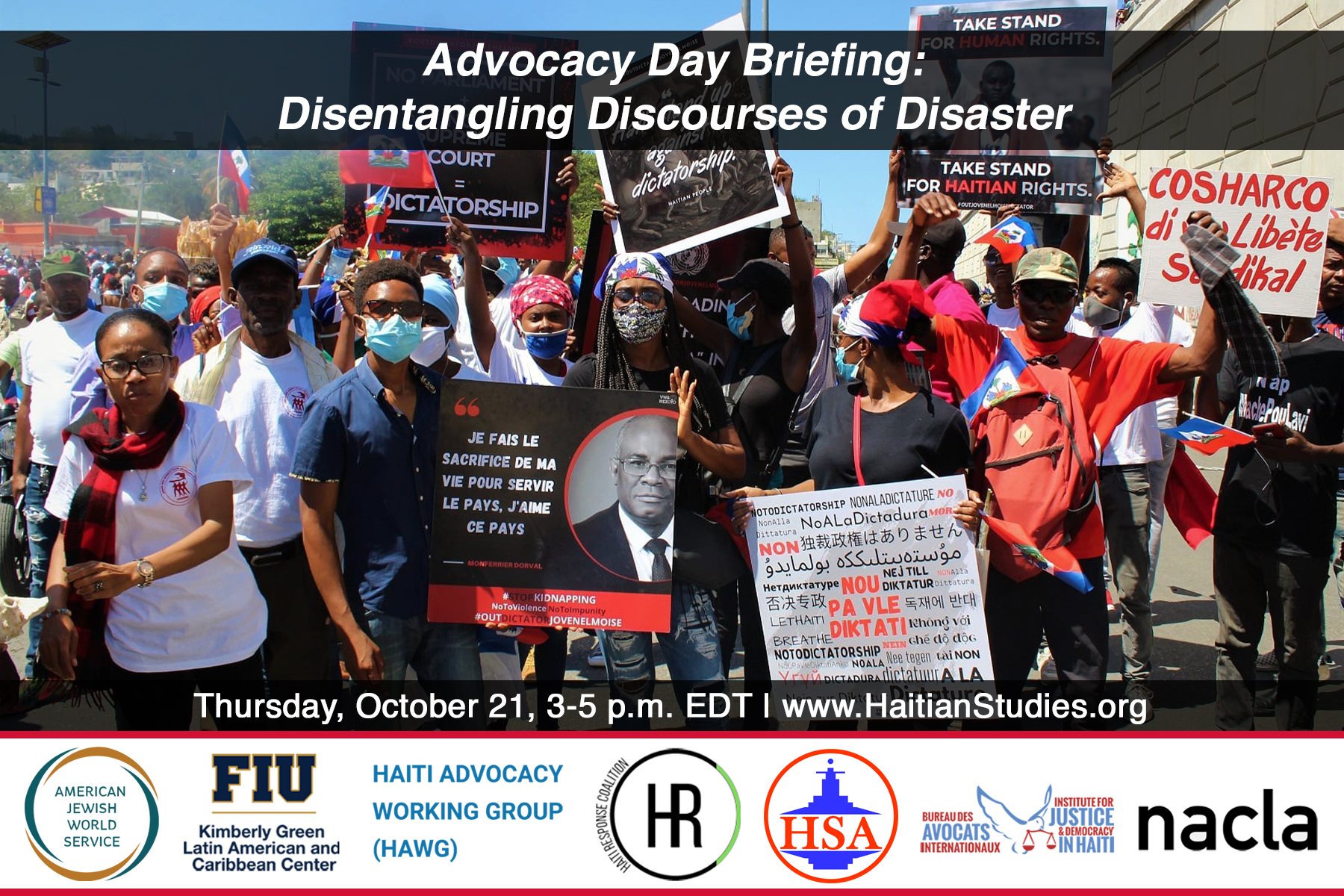 This event is free and open to the public. Click here to read more and view recording of livestream.

As part of a multi-day advocacy effort to bring up-to-date information and analysis from community and civic leaders in Haiti, this public briefing aims to educate and empower scholars, activists, journalists, aid practitioners, and policymakers.

This panel offers timely analyses from a diverse group of leaders on the ground, including the earthquake impacted areas and the U.S. Mexico Border, that explores the common roots of these seemingly separate events, including the international community’s role in the problems. The panel asks hard questions about how to balance the need for a Haitian solution with the still quite urgent need for international assistance.

Since 2020, the world has forever changed. The Covid-19 pandemic with its 3 million death toll has left families devastated throughout the world and created major social, political and economic shifts everywhere as well as the need to adapt to new means of communication. It has also been a time of unprecedented worldwide re-awakening and wide ranging protests against racism, white supremacy, state sanctioned violence and unequal life conditions. People of all generations and all creeds and color have rallied to demand justice, stand against oppression of all sorts, and demand respect for human rights worldwide.

2021 has seen an unprecedented series of disasters for the world’s first free Black republic: in addition to COVID and its economic crisis, Haitian people have faced a constitutional crisis, state-sanctioned violence and human rights violations – both in Haiti and along the U.S.-Mexico border – the assassination of the president, two earthquakes and a deadly hurricane with several more months in the hurricane season extended because of climate change.

Thinking through our professional, disciplinary and interdisciplinary lenses, we ask: What does truly transformational scholarship look like? How do we foreground perspectives that have historically been excluded and paint a more complete picture of Haiti’s past and the possibilities for her future?

This keynote panel offers an opportunity for a conversation with three people who work full time in Haiti, with one foot in the academic world and another in a host of public engagement. The conference theme – and the current historical moment – demand a new praxis, using Gramscian terminology. What role does scholarship play in solutions? 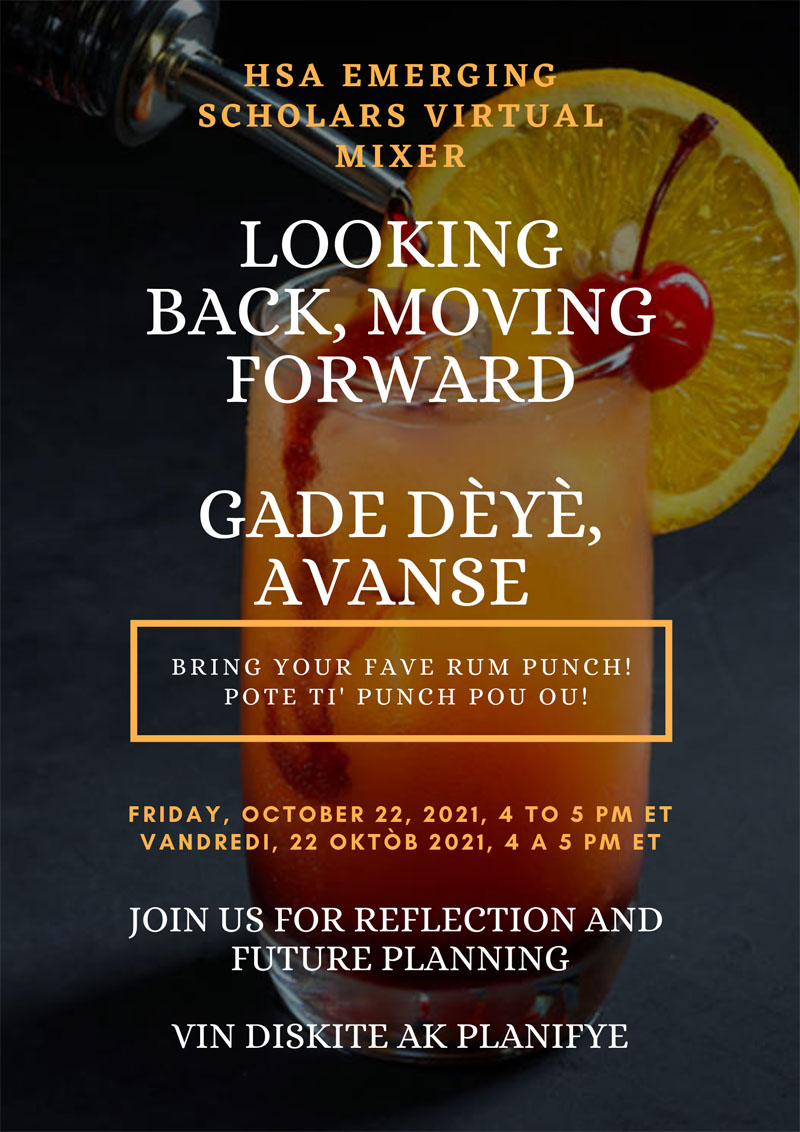 This mixer is an opportunity for us to reflect and discuss the future direction of emerging scholars.

Without a doubt, Haiti’s ongoing crisis will reach a nadir in late October 2021. Following his illegitimate election and extraconstitutional hold on power after a bogus constitutional plebiscite, the regime crisis will be reaching a climax of resistance to tyranny. Whether or not liberal institutions or constructivist ideas can overcome power disparities in some contexts, Haiti has always had a “state against the nation” Now independently sanctioned violence has been privatized or subcontracted enforcement. A system of extortion and embezzlement is subtle, but still continuing from the roots of Duvalierism established through the Macoute networks.

While some of the events will be contingent on the vagaries of Fortuna and other catalytic causes, there are some relatively new intermediate and ultimate causes to the effort to resist the Moisean autocracy. The panel will includes several close colleagues who have been discussing Haiti over several decades, as well as some who are closer in age to the majority of those taking to the Haitian street. Each of the panelist will consider a different elements, connecting the ultimate and intermediate causes with the trajectory of whatever the events of October may the directing: economic; constitutional; political; foreign bilateral, foreign multilateral; grass-roots organizing; religious and social movement resistance, police and army abuse of power, public corruption, mass poverty, public health incapacity, leaders’ impunity, morally repugnant elites, etc.
The international community has often failed Haiti. Liberal peacekeeping and peace building by the United Nations, which ended a fifteen-year occupation of Haiti in 2018, has been a very mixed record: preventing coups and — even more importantly for the US which financed the mission — preventing migrants to the US. Yet the UN mission was noted for its sex trafficking and for introducing a cholera epidemic. The UN also demanded impunity for the UN bombing of that same neighborhood, Cite Soleil.

Digitization has made documentation and responsibility for guilt far more accessible for the mass public as well as in elite debates. The effort to control the narrative of events going forward will depend on who owns the ability to control digital presentations. the UN report on the November 2018 La Saline massacre involved close to one-hundred murders (59 officially, United Nations Mission for Justice Support in Haiti 2019). Where “between 25 and 71 people were killed by members of a criminal gang, with complicity with State actors (UN Document S/2019/198 para. 38), a generally unrecognized factor is the huge underclasses in Haiti’s cities, many of whom are desperate migrants originally from the countryside inside their same countries, or they have migrated from one urban to another urban settlement. In Haiti’s poorest sectors have been highly motivated because of mass starvation facing official corruption that was documented in a Parliamentary report. Haiti fits into the world social movement of global civil society, where these violations have been identified by transnational advocacy networks, which include the UN and parts of the US, with foreign researchers teaming up with local memorialization activists and scholars, which this panel analyzes.

2021 has seen an unprecedented series of disasters for the world’s first free Black republic: in addition to COVID and its economic crisis, Haitian people have faced a constitutional crisis, state-sanctioned violence and human rights violations – both in Haiti and along the U.S.-Mexico border – the assassination of the president, two earthquakes and a deadly hurricane with several more months in the hurricane season extended because of climate change.

Haitian Studies Association has attempted to step up and fulfill our responsibility to make our reservoir of knowledge accessible to journalists, activists, and policymakers, convoking timely conversations. In addition to the monthly Zoom meetings, among other things arising from last year’s Town Hall, we have defined a Town Hall Strategy that centers decolonization of Haitian Studies, and we had a brainstorm to respond to the urgent crisis along the border. Please join your fellow members and reflect on the results of our efforts, and more importantly, help define the road ahead and get us moving on the next steps.

This year, H.S.A. will present the following awards and recognitions:

The Award for Service is presented to a person or organization in recognition of years of dedication and service to the Haitian Studies Association, the field of Haitian Studies, or to the people of Haiti.

The Haitian Studies Association’s biennial Haiti Book Prize is awarded to the best single-authored book in Haitian studies in the social sciences, with broad application beyond the academy.

HSA established the Student and Emerging Scholars’ fund to support student research and participation in our annual conference. This award recognizes undergraduate and graduate scholars.

The Michel-Rolph Trouillot Fund was started in 2012 to expand participation in HSA among Haiti-based academic and public scholars, artists, and professionals who might not be able to attend the conference without financial assistance.